Children on the Oregon Trail 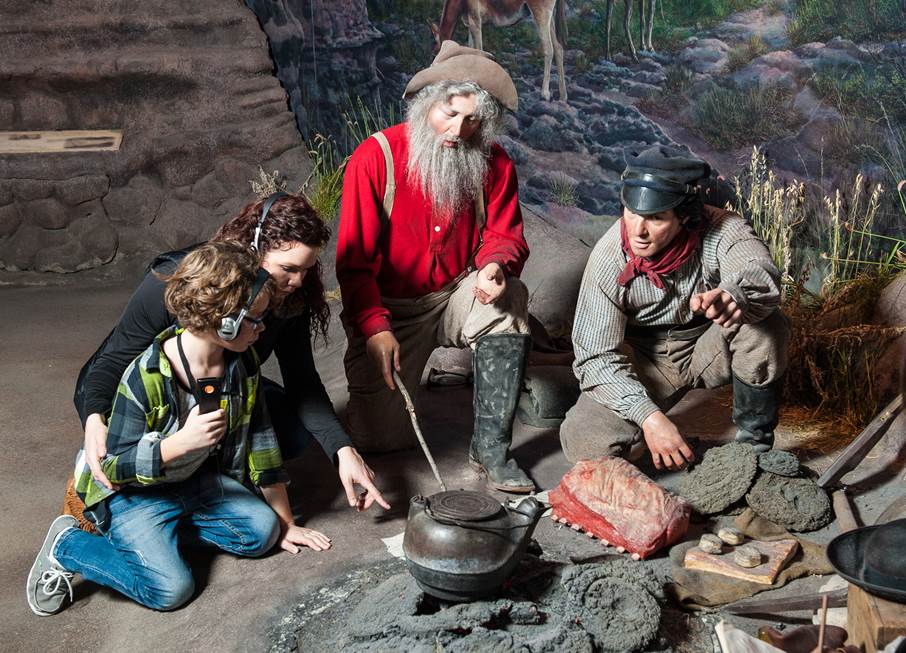 Children on the Oregon Trail

Many stories of life on the Oregon Trail focus on the challenges and hardships that went along with taking a cross-country journey in an ox-drawn wagon.  But, it’s estimated that about 40,000 of the emigrants who made the trip out West were children.  They worked hard, but they also found ways to have fun.

Chores for children on the trail often included fetching water, cooking, washing dishes, and helping to look after the younger children.  There was little firewood available on the Plains. So, children were often assigned to collect the “buffalo chips” that were used for fuel to build fires for warmth and cooking.

During her journey on the trail in 1854, Sarah Sutton wrote, “The girls are washing and baking apple and peach pie, stewing beans and rabbit, and appear to be very happy; all are in good health and no trouble.  We have only eight girls to do all the work.  The trip is fun for them.”

Tucker Scott’s family was on the trail with their nine children in 1852.  According to his daughter Abigail, the children shared a number of assignments.  Mary Francis, at age 19, was the cook; Abigail Jane, aged 17, kept the family journal; Margaret Ann, who was 15, helped with the cooking and the journal; Harvey, at age 14, helped drive one of the wagons; Catherine Amanda, who was 13, drove the loose livestock while riding horseback; and John Henry, aged 9, helped drive a wagon.   The only children who were not assigned tasks were the 3 and 5-year-olds.

Covered wagons were filled with supplies for the journey and the family’s most prized possessions.  And, there was little room for toys.  So, the children often played games together for which little or no equipment was needed.  Many of these games would still look familiar to us, today.  Some would look very old-fashioned.

Once all the chores were done, games around the campfires might include “Ducks Fly.”  It’s kind of a variation of “Simon Says.”  The players follow a leader who might direct the group to flap their arms by saying, “ducks fly,” or to bark by saying, “dogs bark.”  But the leader also tries to trick the group when they say things like “sheep oink,” or “turkeys growl.”  At those times, the players have to stay silent until the leader makes the correct command.

One account of the history of the game “Blind Man’s Buff,” says it was played as early as 2,000 years ago in Greece.  All the game requires is a blindfold. And, it was popular on the wagon trains that crossed the Plains many years later.  The rules vary, but, of course, the general idea is to blindfold one player.  Spin him around.  Then, watch him try to catch one of the other players who have formed a circle around him.

Other pastimes for children on the trail included Cat’s Cradle, for which you only need a bit of string and Racing Hoops.  To race hoops, a wooden or metal hoop is balanced, upright on edge.  The racers make the hoop roll forward by hitting it with a stick. The players could race for the fastest speed or longest distance.

Life on the trail also provided young people with practical learning opportunities.  According to pioneer Margaret Frink, Robert, the young man who was traveling with her family to California, found a pair of “Spanish spurs” and couldn’t wait to try them out.  “He put them on…then attempted to ride our smartest mule,” she recounted.  After Robert mounted the animal, he “stuck his spurs into his sides, and the Billy sent him flying…he looked so ridiculous flying over the mule’s head. We heard no more of Spanish spurs.”

No matter where their journey took them, the children on the Oregon Trail each had experiences they would never forget. Many of them suffered hardships, but many also made new, lifelong friends and many discovered more courage and strength in themselves than they ever knew they had.

Learn more about our history when you visit the Archway and these other Kearney area attractions:

Next post No Matter How You Travel, Stop at the Archway