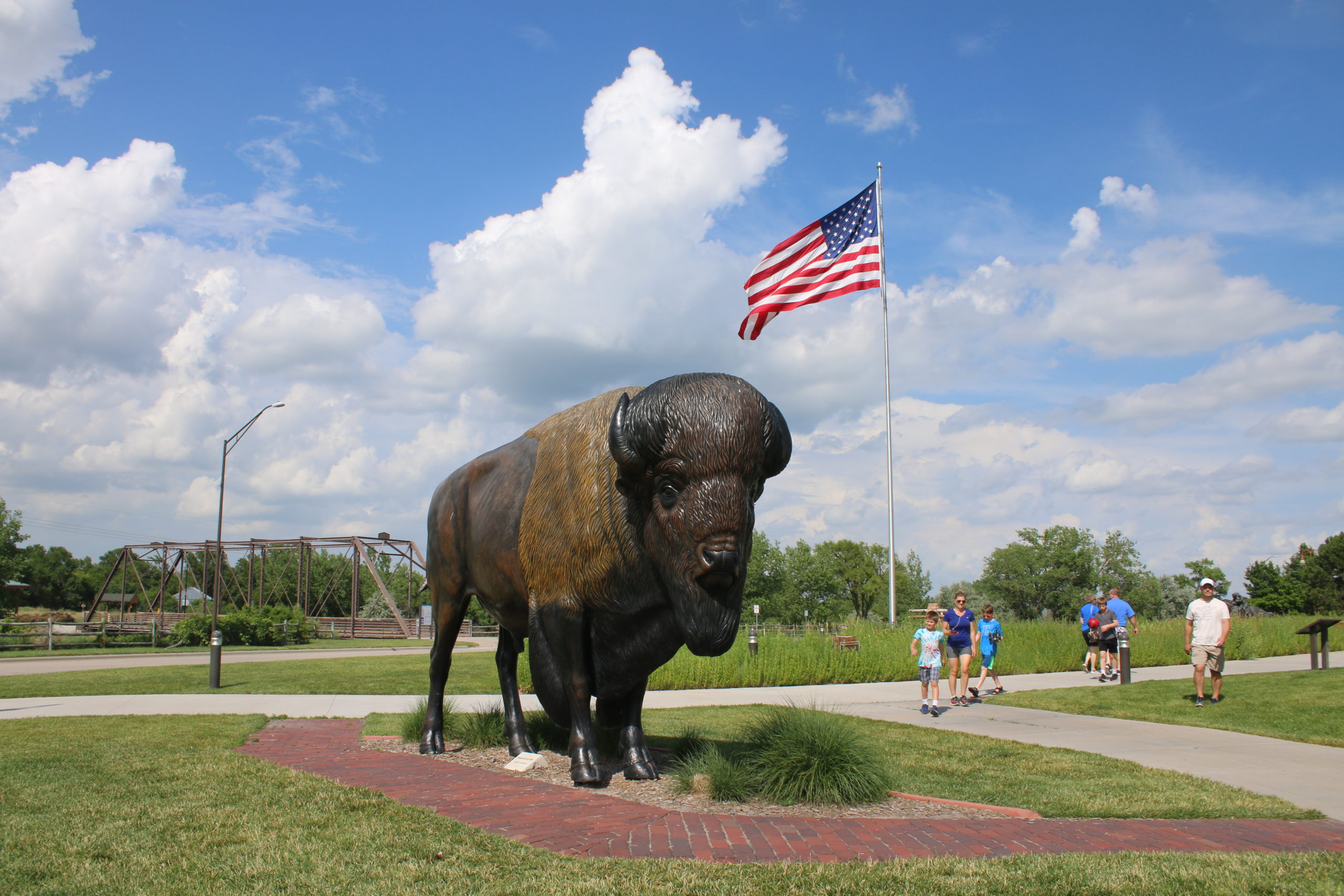 When early wagon trains followed the path along the Great Platte River Road to the west, they often had their first encounters with herds of American bison near present-day Kearney, Nebraska.   Some of the pioneers immediately stopped their wagons and rushed off on a hunt.  Others were frustrated because they might have to wait for up to half a day for a great herd of bison to clear the trail.

Bison had thrived on the land that would become known as North America for thousands of years.  It is estimated that before the year 1800, 60 million bison roamed the continent.  American bison are the largest mammals that are native to North America.  They can reach 7 -11 feet in length and 900 – 2,200 pounds in weight.  Once, their range followed a tract of rich grassland that extended from present-day Alaska to the Gulf of Mexico.

Bison depended on the grasslands of the Plains and healthy grasslands depended on the bison.  The bison’s sharp hooves dug into the land and allowed water and air to reach deeply into the soil. So, native prairie grasses developed deep root systems.  Grasslands were able to recover from fires by sending out new growth.   Bison would seek out the tender new shoots for grazing.  Native Americans would often set portions of the prairie on fire in order to renew the growth of the prairie grasses and attract bison for hunting.  Once Native Americans stopped setting prairie fires and emigrants hunted the bison to near extinction, tall and short grass prairies began to disappear.

Most of the Native Americans who lived in the land that would later become Nebraska grew crops like corn, squash, and beans and depended on seasonal bison hunts to supply them with meat.  The Lakota people were primarily bison hunters and would trade bison hides for the other things they needed.

Bison weren’t only an important source of food.  Their hides were used as material for shelter, clothing, and utensils.  Bison bones were adapted for use as tools.  Sinew from bison was used to make bowstrings and their fat was used for soap.  Over the years, Native Americans on the Plains developed deep cultural and spiritual connections with the bison who sustained their way of life.

In 1840, it is estimated that more than 36 million bison roamed the Plains.  The bison population steadily declined for the next 50 years.  This was caused by habitat loss due to the expansion of ranching and farming and commercial-scale hunting by non-native people who sought meat, hides, and bones for trade. The U.S. Government also acted on a deliberate policy to control Native Americans by eliminating the bison and depriving the natives of an essential source of food.  As the bison population declined, competition among Native Americans for bison meat increased.  So did conflict among the various native people.  By 1900, there were only a few hundred bison left in the wild.

The Crow Chief Plenty Coups said, “When the buffalo went away the hearts of my people fell to the ground, and they could not lift them up again. After this nothing happened. There was little singing anywhere.”

The American Bison Society was founded in 1905 by Ernest Harold Baines, William T. Hornaday, and Theodore Roosevelt.  Along with the Intertribal Buffalo Council, established in 1992, they have worked to save the bison from extinction and to restore the wild herds. Yellowstone National Park is the only place in the U.S. where bison have continuously lived since prehistoric times. A breeding program that began in 1905 at the New York City Zoo was instrumental in helping to restore the wild herd at Wind Cave National Park in South Dakota.  The work of restoring the herds continues, today.

The Archway at I-80 Exit 275 in Kearney, NE, brings the stories of the pioneers, adventurers, and innovators who traveled the Great Platte River Road to life.  Walk with life-sized figures in elaborate settings while using our self-guided audio tour and you’ll experience the story that built America.

For information about other historical sites in the Kearney area, visit these websites:

Previous post The Spirit of the West – New Gallery Exhibit