Enduring Landmarks on the Oregon Trail 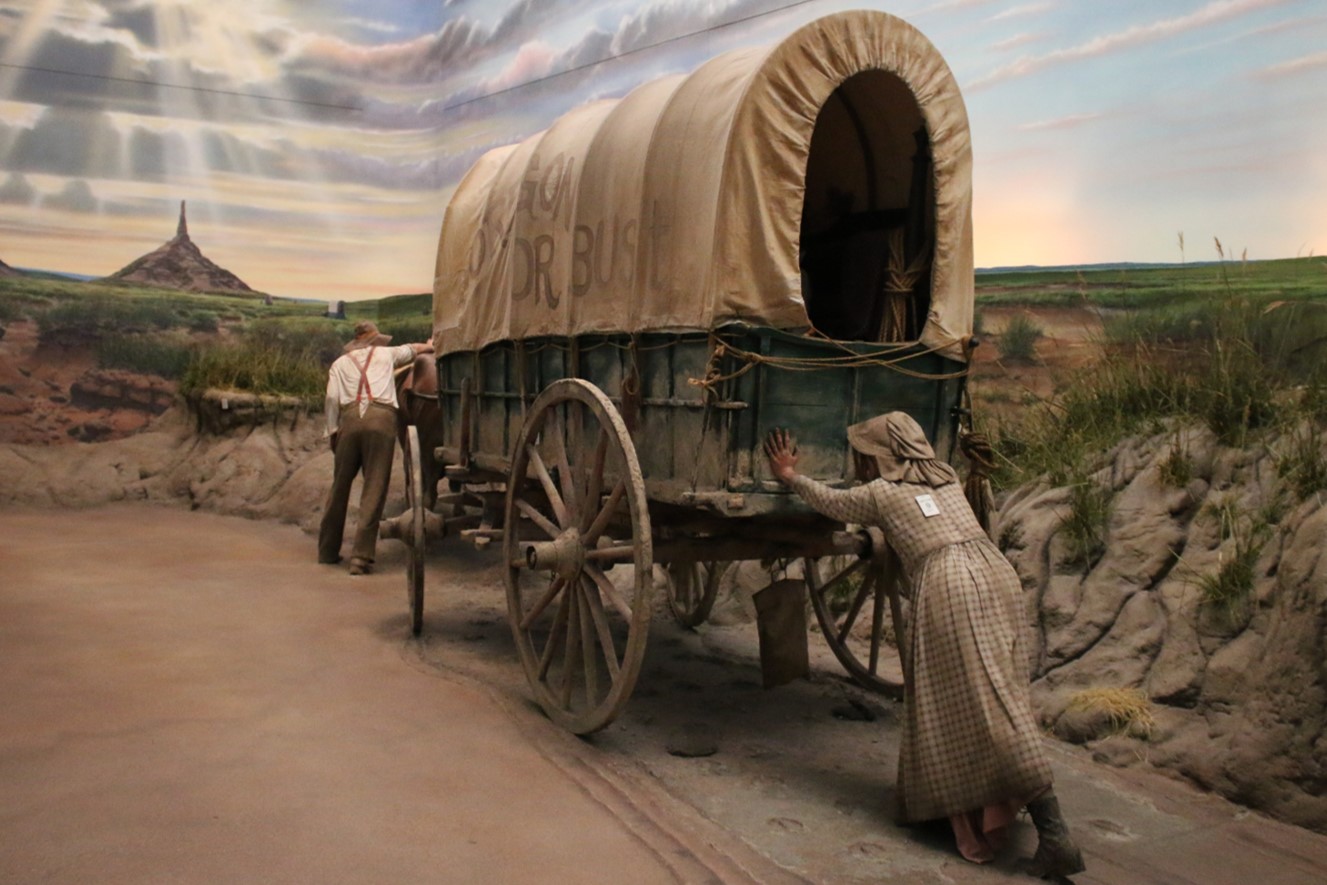 Enduring Landmarks on the Oregon Trail

In 1843, Marcus Whitman helped to lead the first great wagon train on the ancient Native American trail that followed the Platte River through the land that would later become Nebraska. It was the first leg of the pioneer’s journey that would take a total of 5 months and end in the Walla Walla Valley of present-day Oregon. The wagon train, which was later called the Great Migration of 1843, was made up of 100 wagons.  It carried 1,000 pioneers.  And, between the oxen that pulled the wagons and the cattle that trailed behind, the wagon train traveled with about 5,000 animals. Over the next 25 years, nearly 500,000 people would travel through Nebraska on that same trail in search of free land in Oregon, gold in California, religious freedom in Utah, and new opportunities in the West.

The wagon most used by the pioneers was called the prairie schooner because the canvas that covered it looked like the sail of a ship. The typical wagon could carry a load that weighed 1,600 – 2,000 pounds. The wagon could be pulled by horses, mules, or oxen.  Horses and mules both ate special grain that took up valuable space in the wagon.  Oxen were considered the best choice when it came to pulling wagons.  Though they moved more slowly, they were less expensive to buy than horses and mules.  And, they were less likely to run off or to be stolen.  They were also better able to survive by eating vegetation that was easily available on the trail.

Pioneers who set out for Oregon, California, or Utah from the eastern states took a variety of routes on their journey west.  The gateways to the trails were called “jumping-off points.” They included Independence, Missouri; Kansas City, Kansas; and St. Joseph. Missouri.  Beginning in 1848, the routes from these cities all came together at Fort Kearney, which was located just a few miles southeast of present-day Kearney in southern Nebraska.  At Fort Kearny, the pioneers could have their wagons repaired by the carpenter and the blacksmith.  They could stock up on supplies. They could trade for fresh livestock.  And, they could send letters back east to the neighbors and loved ones they had left behind.  The trail westward from Fort Kearny through the Platte River Valley was so heavily traveled that it became known as the Great Platte River Road.   Today, you can visit the site of the historical Fort Kearny.  Click here for more information: http://outdoornebraska.gov/fortkearny/

The number of pioneers who died on the trail from diseases and accidents was much greater than the number who died as a result of conflicts with Native Americans.  Still, the presence of the Army at Fort Kearny was comforting to the pioneers who were heading into unfamiliar territory.  The wagons could travel about 16 miles per day.  Since the wagons were filled with supplies and the ride was very rough, the pioneers spent most of their time walking.  At night, the pioneers would “circle the wagons” to form a coral where the livestock could be kept from wandering off on the prairie. Most wagon trains spent about a month traveling the length of the land that would later become Nebraska.

The pioneers marked their progress across the country as they reached landmarks along the trail. We can still see many of these landmarks as we travel across western Nebraska, today.  After moving along the flat trail on the banks of the South Platte River, the pioneers crossed the river to head north to Fort Laramie.  On the trail north, they came to a slope that came to be known as California Hill.  The hill rises 240 feet over a stretch of nearly one mile. California Hill is accessible, today, just west of present–day Brule, Nebraska.  North of California Hill is a steep downgrade called Windlass Hill, where pioneers had to lock the wheels of their wagons to prevent them from rolling out of control. You can visit Windlass Hill in Ash Hollow State Historical Park.  Ruts in the soil and rock made by the wheels of hundreds of wagons can still be seen on both of these sites, today.  Courthouse Rock was noted by the fur trader Robert Stuart in 1812 and quickly became a guiding landmark for emigrants headed west. About six miles south of Bridgeport, Nebraska, on State Route 88, travelers can still see Jail Rock and Courthouse Rock.   Click here for information about Ash Hollow State Historical Park: http://outdoornebraska.gov/ashhollow/

The most famous of the Oregon Trail landmarks that still stands about 4 miles south of Bayard, Nebraska on the edge of the North Platte River Valley is Chimney Rock.  The spire rises a total of 480 feet above the valley that surrounds it.  Chimney Rock was designated a National Historic Site in 1956.  A visitor center there provides information about the history of the trails and the people who watched for Chimney Rock as they traveled westward over the prairie.  Click here for information about Chimney Rock National Historic Site: https://www.nps.gov/scbl/learn/historyculture/chimney-rock.htm

The Archway at I-80 Exit 275 in Kearney, NE, brings the stories of the pioneers, adventurers, and innovators who traveled the Great Platte River Road to life.  Walk with life-sized figures in elaborate settings while using our self-guided audio tour and you’ll experience the story that built America.

For information about other historical sites in the Kearney area, visit these websites:

Previous post No Matter How You Travel, Stop at the Archway